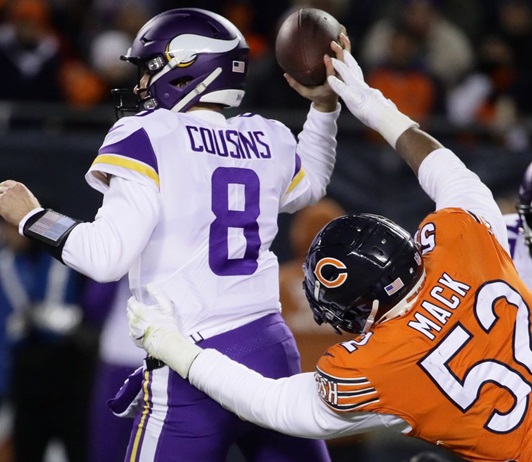 (Chicago, IL) — Kirk Cousins threw for two touchdowns and two interceptions as the Vikings lost to the Bears 25-20 in Chicago. Stefon Diggs had 13 catches for 126 yards and a TD for Minnesota, which slipped to 5-4-and-1. The Vikings are on Sunday Night Football again this week hosting the Packers.

(Minneapolis, MN) — Derrick Rose scored a team-high 18 points off the bench as the Timberwolves lost to the Grizzlies 100-87 at the Target Center. Karl-Anthony Towns had 15 points and 20 boards for the Wolves, who saw their three-game winning streak come to an end. They close out their five-game homestand on Wednesday against Denver.

(Chicago, IL) — Zach Parise scored the lone goal in the second period as the Wild lost to the Blackhawks 3-1 in Chicago. Alex Stalock made 25 saves for Minnesota, which lost for the third time in four games. The Wild open up a three-game homestand on Wednesday against Ottawa.

(Minneapolis, MN) — On the gridiron, the Golden Gophers lost their home finale 24-14 on Saturday to 22nd-ranked Northwestern. Tanner Morgan threw for 197 yards, a touchdown and two interceptions as Minnesota dropped to 5-and-6 including just 2-and-6 in Big Ten play. The Gophers close out the regular-season this Saturday at Wisconsin. They need a win to become bowl eligible.

(Fargo, ND) — North Dakota State finished off its perfect season with a 65-17 rout of Southern Illinois on Saturday at the Fargodome. Easton Stick threw for three touchdowns and ran in for another as the Bison improved to 11-and-0. NDSU earned the number-one seed in the FCS playoffs and a first-round bye. The Bison will play the winner of the Montana State-Incarnate Word matchup in round two.

(Flagstaff, AZ) — North Dakota football closed out its season with a 31-16 loss at Northern Arizona. Nate Ketteringham threw for just 109 yards, a touchdown and two interceptions for UND. The Fighting Hawks end the year 6-and-5 including 4-and-4 in conference play.

(Vancouver, British Columbia) — The Minnesota basketball team took a 10 point lead into halftime and held on to edge Texas A&M 69-64 at the TCL Vancouver Showcase. Jordan Murphy had 14 points and Amir Coffey scores 12 in the winning effort. Minnesota improved to 3-and-0 and will face Santa Clara tomorrow in Vancouver.

(Undated) — In college basketball, North Dakota State trounced Towson 76-51 to earn seventh place in the Islands of the Bahamas Showcase. Tyree Eady netted 14 points for the Bison, who moved to 2-and-3. NDSU visits East Tennessee State this Saturday. Elsewhere, North Dakota hosts Concordia College tomorrow night. UND is 3-and-1 after a 112-58 rout of Minnesota-Morris on Saturday.