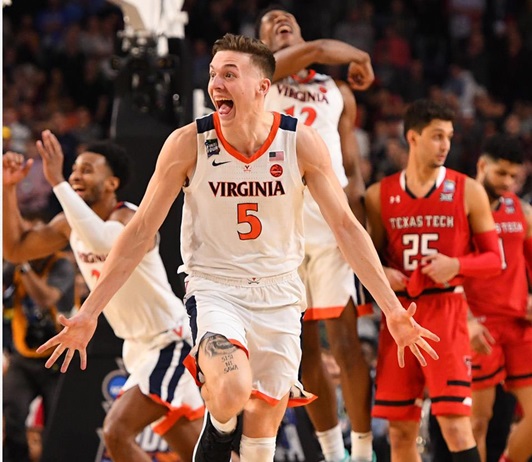 (Minneapolis, MN) — The Virginia Cavaliers are the 2019 NCAA Tournament champions. The top-seeded Cavaliers outlasted third-seeded Texas Tech 85-77 in overtime in the national championship game at US Bank Stadium in Minneapolis. It’s the first national title in school history for Virginia.

(Flushing, NY) — The Twins open up a brief two-game Interleague series against the Mets tonight in New York. Kyle Gibson will get the start for Minnesota, which sits at 5-and-3 on the season. New York will counter with Jacob deGrom. The Twins are parting ways with first baseman/outfielder Tyler Austin. They have traded him to the Giants in exchange for minor league outfielder Malique Ziegler.

(Denver, CO) — The Timberwolves are headed to Denver to wrap up their season tomorrow night facing the Nuggets. Minnesota has lost three-of-five to dip to 36-and-44 on the year. The Wolves will miss the postseason after ending their 14-year playoff drought last year.

(Sunrise, FL) — The NHL Draft Lottery takes place tonight. The Wild have just a three-percent chance at landing the first-overall pick after finishing the season 37-36-and-9, seven points out of the final playoff spot in the West. Colorado has the best odds at 18.5-percent. The Avs got the pick from Ottawa.

(Minneapolis, MN) — North Dakota State is on the road tonight visiting the defending Big Ten champion Golden Gophers in Minnesota. The Bison will then travel to South Dakota State for a three-game Summit League series this weekend in Brookings.

(Grand Forks, ND) — North Dakota football will hold its annual Spring Wrap-Up on Friday night with its final practice at the High Performance Center. The event is free and open to the public.

(Washington, DC) — The Trump administration is working to overturn an agreement that allows Cuban players to play in Major League Baseball. A senior White House official tells NBC News they have the option to decide if the Cuban Baseball Federation is part of the Cuban government. MLB and the CBF reached a deal at the end of 2018 to make it easier for Cuban players to join U.S. teams without defecting.