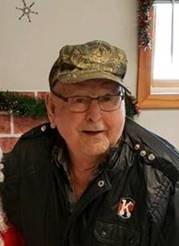 Funeral Services will be on Tuesday, July 9 at 10:30 AM in Grace Evangelical Church of Strathcona, MN, with Pastor Curtis R. Johnson, officiating.

Visitation will be one hour before the service in church.

Burial will be in Greenwood Cemetery in Strathcona.

Harvey LeRayn Hanson was born on May 2, 1929 at home near Strathcona to parents Conrad & Minnie (Strandberg) Hanson. He was an only child. Harvey was baptized on June 30, 1929. He attended school at District 75 and graduated the 8th grade.

Harvey married Josephine Johnson on September 16, 1948. To this union four children were born, Deborah, Kurt, Shirley and Wayne. Harvey worked construction in Wichita, Kansas and many other places from Kansas to Anaconda, MT. In the mid 1960’s he started working for Witcher Construction and also farmed. In 1981 he retired from construction and started farming full time. In 1993, son Wayne took over the farm and Harvey continued to help him. He drove gravel truck for H & S Construction for a few years. Harvey sold SnoJet snowmobiles from 1967 to 1973 and was active in the racing circuit.

He is survived by his wife—LaVerne.