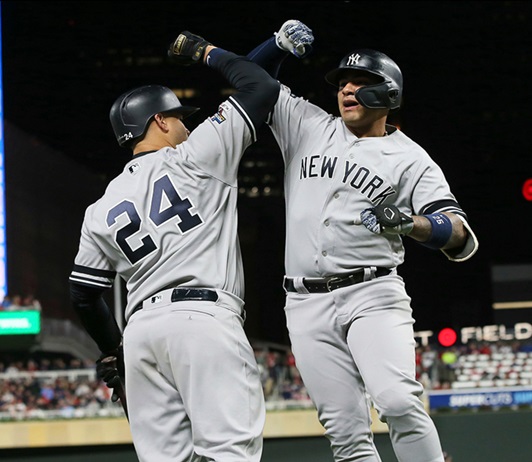 (Minneapolis, MN) — The Yankees hit three home runs to beat the Twins 5-1 and sweep their ALDS, eliminating them from the playoffs. Eddie Rosario prevented the shutout with a home run in the eighth inning. Jake Odorizzi gave up two runs over five frames to take the loss. Minnesota finished the season 101-and-61 in Rocco Baldelli’s first year as manager.

In the other AL Division Series, the Rays crushed the Astros 10-3 in St. Petersburg to pull within 2-1. Tampa Bay will host Game Four today.

(Undated) — Both National League Division Series will see a Game #5. The Cardinals tied their best-of-five NLDS with a 5-4, 10-inning win over the Braves in St. Louis. The Nationals also evened their NLDS at two apiece with a 6-1 win over the Dodgers in D.C. Both Game Fives are tomorrow as the Cardinals visit Atlanta and the Nationals head to Los Angeles.

(Santa Clara, CA) — Matt Breida rushed for an 83-yard touchdown on the 49ers’ first play as they ran past the Browns 31-3 on Monday Night Football in Santa Clara. Breida also caught a TD as San Francisco improved to 4-and-0. Baker Mayfield took four sacks, threw two interceptions and lost a fumble for Cleveland. The Browns dropped to 2-and-3.

(Phoenix, AZ) — The Timberwolves are in Phoenix to open up preseason play tonight against the Suns. The Wolves will play a total of five exhibition tuneups before the regular-season gets going October 23rd at Brooklyn. Minnesota looks to rebound from last year’s 36-and-46 record.

(St. Paul, MN) — The Wild are off the ice for a few more days. They will hit the road to Winnipeg on Thursday to face the Jets in the last of their three-game road trip to begin the year. The Wild will then host Pittsburgh in their home opener at The X on Saturday. The Wild lost their first two games to begin the season in Nashville and Colorado.

(Eagan, MN) — The Vikings are turning their attention to the Eagles. They will host Philadelphia on Sunday at US Bank Stadium. The Vikes have alternated wins and losses to begin the season and are 3-and-2 overall after their 28-10 victory at the Giants last Sunday. The Eagles are also 3-and-2.

(Minneapolis, MN) — The 25th-ranked Golden Gophers are gearing up for their Big Ten battle with Nebraska on Saturday at TCF Stadium. Minnesota jumped into the rankings after Saturday’s 40-17 rout of Illinois. The Gophers are 5-and-0 for the first time since 2004. That includes a 2-and-0 mark in conference play. The Cornhuskers sit at 4-and-2 and 2-and-1.

(St. Paul, MN) — Minnesota United is preparing for its playoff match against the LA Galaxy. The Loons will host the Galaxy on October 20th at Allianz Field. Minnesota earned the four-seed in the Western Conference after finishing with 53 points. LA was right behind in fifth with 51. The winner advances to face top-seeded LAFC in the conference semifinals.