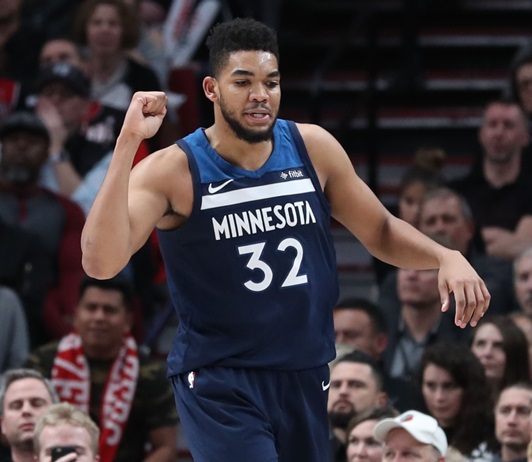 (Phoenix, AZ) — Karl-Anthony Towns racked up 19 points and 10 rebounds but the Timberwolves fell short in a 111-106 loss to the Suns in the preseason opener in Phoenix. First-round pick Jarret Culver netted 11 points off the bench in defeat. The Wolves visit Golden State tomorrow night at the new Chase Center in San Francisco.

(St. Paul, MN) — The Wild are headed to Winnipeg to meet the Jets tomorrow night. It’s the final stop on a three-game road trip to begin the season. The Wild will then host Pittsburgh in their home opener on Saturday at The X. Minnesota is 0-and-2 so far following losses in Nashville and Colorado.

(Eagan, MN) — The Vikings are back on the practice field preparing for the Eagles. Philadelphia comes to town Sunday for Week Six action. The Vikes have alternated wins and losses to begin the season. They sit at 3-and-2 overall after their 28-10 victory at the Giants last Sunday. The Eagles are also 3-and-2.

(Minneapolis, MN) — The 25th-ranked Golden Gophers continue to gear up for the Cornhuskers. Minnesota hosts Nebraska on Saturday at TCF Stadium. The Gophers are off to their first 5-and-0 start since 2004. That includes a 2-and-0 mark in conference play. The Huskers sit at 4-and-2 and 2-and-1.

(St. Paul, MN) — Minnesota United has some extra time off before its playoff match. The Loons will host the LA Galaxy on October 20th at Allianz Field. Minnesota earned the four-seed in the Western Conference after finishing with 53 points. LA was fifth with 51. The winner will meet top-seeded LAFC in the conference semifinals.

(Undated) — Both of the National League Division Series will be decided today. First, the Braves host the Cardinals in Atlanta and then the Nationals visit the Dodgers in Los Angeles in deciding Game Fives. The Cards and Nats both won on Monday to even those series at two. Today’s winners will advance to the National League Championship Series.