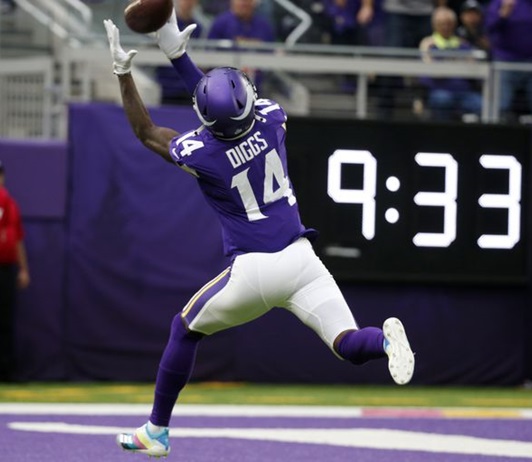 (Minneapolis, MN) — Kirk Cousins threw for 333 yards and four touchdowns, including three to Stefon Diggs, as the Vikings soared past the Eagles 38-20 in Minneapolis. Diggs racked up seven catches for 167 yards as the Vikings improved to 4-and-2 with their second straight win. Dalvin Cook ran for 41 yards and a score in the victory. The Vikes visit Detroit this Sunday.

(Minneapolis, MN) — Treveon Graham netted 14 points to pace the Timberwolves to a 131-101 rout of Maccabi Haifa in an exhibition tuneup at the Target Center. Jarrett Culver chipped in with 11 points for the Wolves, who improved to 1-and-2. The Wolves visit Indiana tomorrow and Milwaukee on Thursday to wrap up the preseason.

(Ottawa, Ontario) — The Wild open up a three-game Canadian road trip tonight in Ottawa against the Senators. Minnesota will also visit Toronto and Montreal this week before returning home to face the Canadiens on Sunday in the back end of a home-and-home. The Wild are 0-4-and-0 on the season.

(Minneapolis, MN) — The Golden Gophers are up five spots to 20th in this week’s Top-25 Coaches’ Poll. Minnesota racked up 322 rushing yards on its way to a 34-7 rout of Nebraska on Saturday at TCF Bank Stadium. The 6-and-0 Gophers have won eight straight dating back to last season, their longest winning streak since 1948-49. Minnesota visits Rutgers this Saturday.

(Undated) — North Dakota State is still perfect on the season, while North Dakota’s back-and-forth season continues. The Bison blasted Northern Iowa 46-14 on Saturday to improve to 6-and-0 on the season. The Fighting Hawks lost 55-20 at Idaho State to fall to 3-and-3 including 1-and-2 in conference play. NDSU hosts Missouri State this Saturday, while UND visits Cal Poly.

(St. Paul, MN) — Minnesota United is gearing up for the MLS playoffs. The Loons will host the LA Galaxy this Sunday in round one at Allianz Field. Minnesota earned the four-seed in the West after finishing with 53 points. LA was fifth with 51. The winner will meet top-seeded LAFC in the conference semifinals.