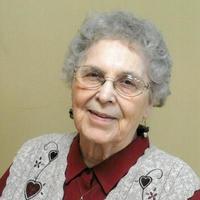 Visitation will be held one hour prior to the funeral service on Friday at Johnson Funeral Service.

Adeline Ruth (Thompson) Midthun was born on June 12, 1924 at home in rural Brooten, MN, the daughter of Andrew and Tina (Fauskee) Thompson. She grew up on the family farm and attended grades 1-8 in a one room country school in District #66. She was baptized and confirmed at Big Grove Lutheran Church in North Fork Township. She graduated from Brooten High School in 1942. Adeline attended St. Cloud Teacher’s College (where she was a member of the choir and band) for 2 years and got her degree. For the next few years she was an elementary teacher in Eden Valley, Eagle Bend, Staples, and Detroit Lakes.

Following their marriage Adeline then finished her Bachelor of Science degree at Moorhead State College. She later taught in Moorhead and Red Lake Falls, MN before retiring in 1986 after 30 years of teaching.

In her spare time, Adeline loved reading books, sewing, knitting and playing cards. She was a member of Zion Lutheran Church in Thief River Falls where she enjoyed being in the Sarah Circle.

During her retirement years Adeline liked to spend her precious time with her children, grandchild and great grandchildren. They are her pride and joy. Adeline was a special lady, mother and wife, and she will be greatly missed.

Adeline is survived by her children, Brenda “Jacy” (Leonard) Olson of Viking, MN; David (Daisy) Midthun of Littleton, CO, as well as her grandchild, Tina (Mike) Hartel of Grand Forks, ND, and great grandchildren, Mallorie and Joshua. She is also survived by many cousins, nieces, nephews and other relatives.

She is preceded in death by her husband Norman Midthun, her parents Andrew and Tina (Fauskee) Thompson, and her brothers Kenneth, Ralph, and Eugene Thompson.