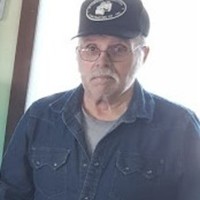 Sylvester “Buddy” Marvin Hemp was born October 22, 1944 at Bemidji, MN son of Sylvester and Ellen (Rasmussen) Hemp. He was baptized and confirmed at First Lutheran Church in Middle River. Buddy was raised in the Middle River area and attended school in Middle River graduating in 1962.

Buddy entered the National Guard when he was a senior in High School. He worked road construction in the upper Midwest operating heavy equipment, retiring in 2006.

On March 6, 1971 he was united in marriage to Eileen Hanson at Middle River, MN. The couple made their home in Middle River and moving to the country in the spring of 1992.  Buddy has lived at the Thief River Care Center in Thief River since August of 2018.

Buddy enjoyed helping his brother on the farm. He also enjoyed hunting and fishing, attending the Brainerd races and watching NASCAR races. He loved his fur babies Everest and April. He was a member of the Operating Engineers Local #49 and the Middle River American Legion Post #444. Buddy was active on the Middle River Fire Department for 20 years.

He is preceded in death by his parents, brother Dean Hemp. father and mother-in-law Clarence and Beatrice Hanson, sister-in-law Bernice Ward and brother-in-law David Ward.