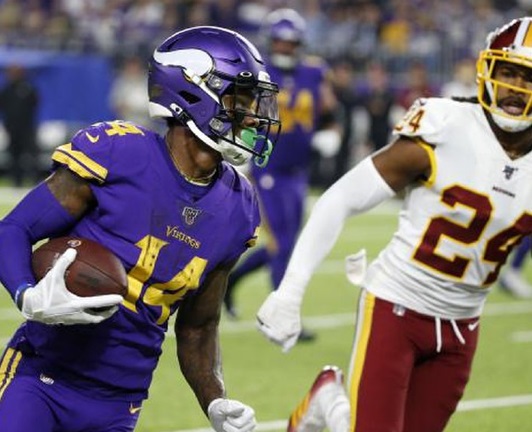 (Minneapolis, MN) — Dalvin Cook ran for the game’s only touchdown just before halftime as the Vikings edged the Redskins 19-9 on Thursday Night Football in Minnesota. Cook had 171 total yards as the Vikings won their fourth straight to improve to 6-and-2. Kirk Cousins was 23-of-26 for 285 yards against his former team. Adrian Peterson also faced his former team, rushing for 76 yards on 14 carries for Washington. The Vikes visit the Kansas City Chiefs next Sunday.

(Nashville, TN) — Pekka Rinne made 26 saves for his first shutout of the season and 56th of his career as the Predators blanked the Wild 4-0 in Nashville. \Alex Stalock stopped 17-of-21 shots for Minnesota, which had won its previous two. The Wild host the LA Kings tomorrow before heading back out on the road.

(Washington, DC) — After a travel day, the World Series resumes tonight in Washington, D.C. The Nationals host the Astros in Game Three, leading the best-of-seven matchup two-games-to-none. Anibal Sanchez will start for the Nats, while Houston counters with Zack Greinke. This marks the first World Series game in the nation’s capital since 1933.

(Charlotte, NC) — The Timberwolves are in Charlotte to clash with the Hornets tonight. The Wolves will then host the Miami Heat on Sunday in their home opener at the Target Center. They opened up the season with a 127-126 overtime win in Brooklyn on Wednesday.

(Undated) — North Dakota State and North Dakota are back on the gridiron tomorrow. The Bison take their perfect record to Brookings to battle South Dakota State. NDSU sits at 7-and-0 including 3-and-0 in MVFC play. The Fighting Hawks are back home to clash with Montana State. UND is 4-and-3 on the year and 2-and-2 in conference action.

(Minneapolis, MN) — The 16th-ranked and undefeated Golden Gophers are back home to clash with Maryland tomorrow afternoon at TCF Bank Stadium. Minnesota remains perfect at 7-and-0 including 4-and-0 in the Big Ten after a 42-7 rout of Rutgers last Saturday. The Terps sit at 3-and-4 and 1-and-3.