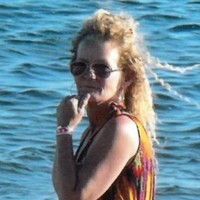 Susan Stenzel, 58, of Thief River Falls, MN passed away on Sunday, October 27, 2019 at Altru Hospital in Grand Forks, ND with her loving family at her side.

The service to celebrate the life of Susan will be held at 2:00 PM on Friday, November 1, 2019 at the Epiphany Station in Thief River Falls with Pastor Jeff Gauss officiating. Visitation will be held from 5:00 PM until 7:00 PM with a 7:00 PM prayer service led by Pastor Matty Towse on Thursday, October 31, 2019 at Johnson Funeral Service in Thief River Falls. Visitation will also be held one hour prior to the service.

Susan Angela Anderson was born on September 8, 1961 in Thief River Falls, MN the daughter of Jim and Norma (Knutson) Hutchinson. She was baptized into the Christian faith. She attended Knox Elementary, Lincoln High School and graduated from Goodridge High School with the class of 1980.

Susan became a mother to Jeromy, Grant, and Charity. While the kids were growing, Susan loved to be home with them. After the kids entered school, she worked out at different businesses in Thief River Falls including, Arctic Cat, Tunberg’s and since 1999 has been employed at Digi-Key.

She enjoyed 4-wheeling, camping, traveling, spending time in the outdoors and especially loved getting together with her family. She pretended to tolerate gardening and crocheting. Her grandchildren were her pride and joy. She was joyful, loving, kind, still a kid at heart, and found the positive in everything.

In 2012, Susan met the love of her life, Wes Stenzel and on November 18, 2017 the couple married in a surprise ceremony at their home surrounded by their loving family.

Susan led the praise and worship at the Community Church International for over twenty years and was self-taught on the piano and guitar. She traveled with the church in the summer-time attending parades and special events.

She is preceded in death by her mother, Norma; Wes’s son, Scott; grandmother, Minerva Nelson.