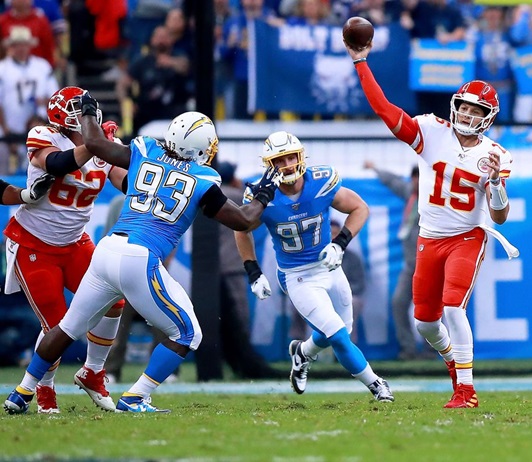 (Salt Lake City, UT) — The Timberwolves outscored the Jazz 36-24 in the fourth quarter on their way to a 112-102 win in Utah. Karl-Anthony Towns racked up 29 points and 13 rebounds for Minnesota, which snapped a two-game skid and improved to 8-and-6 overall. Jeff Teague tallied 21 points and 11 assists in the victory. The teams rematch tomorrow night at the Target Center.

(Buffalo, NY) — The Wild are on the road to skate against the Sabres tonight in Buffalo. Minnesota will then return home to clash with Colorado on Thursday before heading right back out on the road this weekend. The Wild are 7-11-and-2 after a 4-3 overtime setback to Carolina on Saturday.

(Mexico City, Mexico) — Daniel Sorensen intercepted Philip Rivers in the final minute as the Chiefs held off the Chargers 24-17 in Mexico City. The KC defense had four picks in all. Patrick Mahomes passed for 182 yards, a touchdown and one interception as KC improved to 7-and-4. Keenan Allen caught a TD and Michael Badgley made three field goals for LA, which fell to 4-and-7.

(Eagan, MN) — The Vikings are enjoying an extended break. They enter their bye week riding a two-game winning streak and are 8-and-3 overall, just a half-game behind 8-and-2 Green Bay in the NFC North. The Vikes will return to action on Monday Night Football at Seattle on December 2nd.

(Minneapolis, MN) — The Golden Gophers are expected to drop when the new College Football Playoff rankings are released tonight. Minnesota was ranked seventh last week before suffering its first loss Saturday 23-19 at Iowa. The Gophers slipped to 9-and-1 including 6-and-1 in Big Ten play. They visit Northwestern this Saturday.

(Undated) — North Dakota State and North Dakota football are gearing up for their final games of the regular-season. The undefeated Bison close out the year at Southern Illinois. NDSU sits at 11-and-0. The 6-and-4 Fighting Hawks host Southern Utah.

(Minneapolis, MN) — The Minnesota men’s basketball team is back in action Thursday hosting Central Michigan at Williams Arena. It will be the first of four straight home games. The Gophers are just 1-and-3 following Friday’s 73-69 setback at Utah.