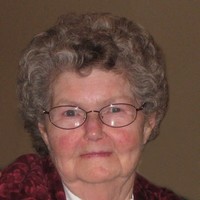 Funeral Services will be held at 10:30 AM on Thursday, February 27, 2020 at Grace Lutheran Church in Grygla, MN, with Pastor Nathan Satchwill officiating.  Interment will take place in the spring at Valle Cemetery, rural Grygla, MN.

Visitation will take place from 5:00 PM until 7:00 PM with a 7:00 PM Prayer Service on Wednesday, February 26, 2020 at Johnson Funeral Service in Thief River Falls, MN.  Visitation will also take place one hour prior to the funeral service on Thursday at the church.

Doris Arlene (Teigland) Smeby was born on July 6, 1930 in Waukegan, Illinois to James and Signe (Hylland) Teigland.  They moved to their farm near Grygla, MN when Doris was a baby.  Doris was the third of ten children.  She attended the Sandsmark School through the 8th grade.  After that she did a lot of the cooking, canning, gardening, and child care for the family.

On December 10th, 1950 she married John Smeby.  They lived with his parents, Even and Randi Smeby before building their house in the same yard.   After their first 4 children had filled their home, they moved it across the field to their own family farm, where 2 more children were squeezed in.

Doris was a hard working farmer’s wife, mother, housewife, gardener, and of course – a great cook.  In addition to keeping her family well fed, Doris worked for many years as a cook/waitress at the Pool Hall.   After that she became a cook at the Grygla School for many years.  Some of the foods that she was best known for were her donuts, lefse, potato salad, buns, flatbread, and potato dumplings.

John and Doris enjoyed 56-years of marriage and lived the life of dairy farmers; staying close to home the majority of the time. They enjoyed sharing lunch in the field on the tailgate of the pick-up, or a Sunday drive to the Jackpines. Many memories were made during Sunday afternoon picnics at Red Lake or Hayes Park, and at family ball games.  They got the camping bug when they bought their first camper, and enjoyed many weekends camping with the grandkids.  They were able to make a couple of major trips together.  Their first flight was to visit Nancy’s family in Sierra Leone. They were also able to spend time with relatives in Norway and around the United States.

After the death of her life-long sweetheart, Doris filled the void by becoming an avid reader, spending time with friends at Senior Meals, and had a special relationship with each of her grand-kids and great grand-kids.  She looked forward to spending time with Oliver after school each day.

Doris was a devout Christian and a long-time member of the Community Bible Church.  She believed that the reason she lived on after John’s death was to pray for her family.  She prayed for each one by name every day.

Doris lived to the age of 89 years, 7 months, and 17 days.  May her memory be blessed and her prayers and wishes for her family be honored.