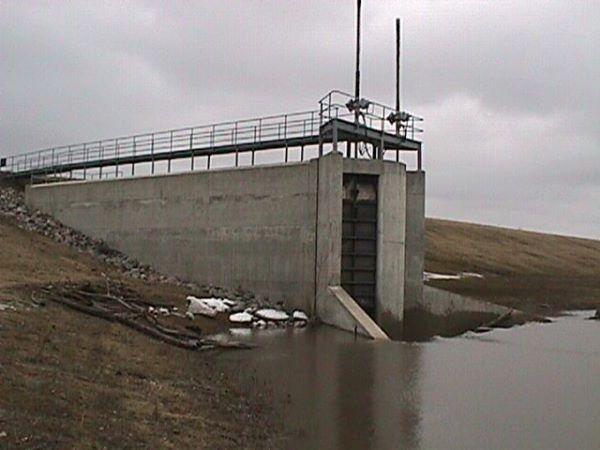 pril 2nd, the Red Lake Watershed District announced closure of the Schirrick Dam gates on the Black River for the following day at 1:00 p.m.   This was done as a measure to reduce flood flows and stages downstream on the Red Lake River and the Red River of the North which helps protect the cities of Crookston and Grand Forks. Four days later  (4-7-2020) at 2:50 p.m. floodwaters were beginning to top the principal outlet structure. Two days later,(4-9-2020)  the Red Lake Watershed District opened their west gate 3 ½ feet to keep water from going over the emergency spillway.  Six days later,(4-15-2020) with floodwaters stabilized or receding, the gates of the Schirrick Dam were opened and began a release of impounded waters. Thief River Falls Radio wanted to know more about the Schirrick dam and impoundment. We asked Nick Olson, Red Lake Watershed District, to first describe it.

We also asked Olson to tell us how the structure was recently used, this was last Thursday

We then asked Olson to explain the effect the Schirrick Dam has on downstream flooding and what information they use to make decisions about opening and closing gates.

We asked Olson how they know when to start monitoring the gates of the Schirrick Dam.

Finally, we asked Olson how this spring was compared to previous seasons. Schirrick Dam is located on the Black River in Section 35 of Wylie Township in the northwest part of Red Lake County. This is about 20 miles northeast of Crookston, MN.The Schirrick Dam was completed and made operational in 1985. The cost of construction at that time was approximately $1,019,000.