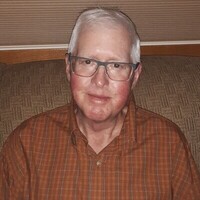 Scott Strand left this world and entered his heavenly home on June 3, 2020, when he passed away in his sleep at his home under the care of hospice with his loving wife, Glenda by his side.

Funeral services will be held following all of the CDC and State of MN Covid guidelines will be held at 11:00 AM on Friday, June 12, 2020 at Rodnes Lutheran Church, rural Erskine, MN with Rev. Joel Smeby officiating. Burial will follow in the church cemetery.

Visitation will be held from 5:00 PM until 7:00 PM with a 7:00 PM prayer service on Thursday, June 11, 2020 at Johnson Funeral Service in Thief River Falls, MN. Visitation will also be held one hour prior to the service on Friday at Rodnes Lutheran Church.

Scott Erroll Strand was born on June 16, 1958, in Zumbrota, MN to parents Earl and Shirley (Friese) Strand.  He was baptized at Lands Lutheran Church in Zumbrota.  In 1968, the family moved to a farm south of Brooks, MN.  Scott was confirmed at Zion Lutheran Church in Oklee and graduated from Oklee High School in in 1976.  He married Glenda Rustan on June 28, 1980.  They made their home on a farmstead north of Erskine where they raised their two sons, Conrad born in 1983 and Bradley born in 1986.  In 1991 they moved just a few miles away where they have since resided.

Scott farmed with his dad and purchased his own farm in 1979.  He also started selling Na-Churs liquid fertilizer and Sigco seed and earned many sales awards.  In 1978 he started Brooks Farm Supply and his brother, Brent, joined the business shortly thereafter.  The business sold chemical, seed and fertilizer and later evolved into selling fuel and propane.  They expanded their business which included Roseau Petroleum, Solway Propane, South Stop C-Store in Red Lake Falls and also bought Bradley Motors in Erskine.  They later downsized and completely sold the business in 2004.  Scott was a hard worker and very driven in the business world most of his life.  In 2005, Scott started a new business, Hunter’s Outlet, in Thief River Falls that he operated along with his two sons and wife.

Scott enjoyed hunting and shooting sports and once took his family on an African hunting safari.  He had an interest in exotic animals and at one time raised many various animals including buffalo, ostrich, and emu to name a few.  He was most passionate about horticulture throughout his life and spent countless hours in his yard planting and tending to trees, vines, berries and also started a fruit orchard.  Scott had a witty sense of humor and a real gift for telling a story.

Scott became a member of Rodnes Lutheran Church in 2007 where he served as a deacon and attended bible study and the men’s prayer group.  He loved the Lord Jesus and in his latter years was an advocate for inviting people to attend church and talking to people about his faith in God.  In March of 2019 Scott was diagnosed with kidney cancer.  Even as his health was failing he continued to thank and praise God for his blessings and was an inspiration to many.  Scott left this world and entered his heavenly home on June 3, 2020, when he passed away in his sleep at his home under the care of hospice with his wife by his side.

Scott was preceded in death by his father, Earl, in 2012; and father-in-law and mother-in-law, Richard and Gloria Rustan.