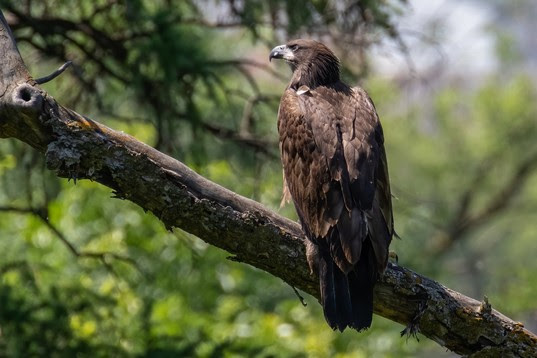 Yesterday was a sad day.  We regret to inform you that E1 passed away yesterday. Unfortunately, she flew into a power line and was found dead.   One of our photographers who monitors the nest reported a chick was dead and hanging from a near by power structure.  He reported it to Nongame staff and we contacted Xcel Energy, who immediately responded and had a crew on site to retrieve the chick, which was identified as E1.

No one witnessed the event.  Her wing caught a loop and she was found hanging.  Once Xcel retrieved the remains, Nongame took possession of E1.  It was determined that she was not electrocuted.  It appears she hit the line and likely died on impact  It happened some time between 8:30 am and 6 pm yesterday, July 3.  Unfortunately, it is not uncommon for eagles to perish by hitting power lines, but it is always sad to witness and report.

We’ve witnessed dangers and mortality at our nest, yet never really knowing for sure how many chicks survive past their first year.  Power lines, vehicles and predators are all hazards for eagles and many will encounter dangerous situations, especially when they are nesting so close to urban areas.  Because Minnesota’s eagle population is healthy, there is a higher percentage of eagle mortality. It is difficult to see mortality as a positive thing, but it does mean that our population as a whole is healthy.

Of course, we hope that E2 will continue to thrive and survive until adulthood.  There is no way to protect birds from all of the environmental hazards, but escaping them will result in a stronger individual.  E2 has, and will continue to visit the nest and we will keep the camera on until at least the end of August.

As we remember E1 and celebrate our nation’s birthday, we wish a happy July 4th to everyone.

We also need to thank you for your continued support of the Nongame Wildlife Program . We rely on your contributions – they make it possible for our team to be on call to respond to these emergencies 24/7. We couldn’t do it without your support. Thank you!