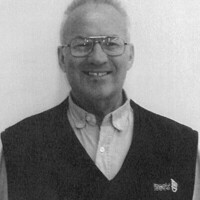 (A Rural Reflections column from about 6 years ago, written after a conversation with Larry Myhrer who passed away this past week)

The most important decision I make when grocery shopping at Hugo’s is which
lane I chose for check-out. My decision is based partially on speed but also about a little good conversation by someone who has something to say. At Hugo’s my choice is typically the sharp-looking gent’ with the gray hair and dark-rim glasses. I am talking about Larry Myhrer who is the subject of this week’s column.

Larry Myhrer began working at Hugo’s Grocery in 1990 but has roots which go way
deeper. Myhrer started at the old Jim’s Hartz back in 1968 when it
was owned by Jim Winjum. In 1972, Dwight Tangquist purchased the
Hartz store which employed Myhrer until 1990 when he went to work for
Hugo’s.

Times change and Myhrer remembers the changes. He started out driving
to work in his dad’s 1954 Chevrolet pick-up but saved his hourly wage
of $1.60 until he was able to purchase his own Ford Galaxy 500. In the
late sixties you could purchase; the four roll pack of Charmin for
thirty-nine cents, bananas for 10 cents a pound and sixteen ounce
canned vegetables at 10 for a dollar. The special on canned
vegetables kept Larry so busy re-stocking that he got in a pretty
good work-out. When the time for the special ran out, Myhrer then had
to peel off the old sticker price and re-stamp all of those cans. No
UPC codes or computers, just gold old-fashioned labor.

Larry and I discussed the history of Dwight’s Hartz which was housed
in the same building occupied by Thrifty White Pharmacy. It’s amazing to think
how large the old Hartz seemed to me and now realize you could fit
several of them in the current Hugo’s building. Dwight’s Hartz even
had a restaurant located approximately where the check-out is for
Thrifty White. The cook was Tillie Sabol who was known around town as
a good cook. Larry was a young man back then and needed fuel to stack fifty pound
flour sacks to the rafters in the limited storage space. Larry would
occupy one of the eight stools and Tillie Sabol would feed him two
barbecues, a piece of pie with ice cream, two donuts and a soda for
$1.25.

In the early seventies, Dwight Tangquist purchased Mike’s Hartz in
Karlstad and Milo’s Hartz in Warroad. Larry Myhrer was in charge of
moving groceries from the Dwight’s Hartz location to the new stores.
He would sometimes drop-off small orders when he went to visit
friends. Larry delivered groceries to schools or churches and even
100 pound sacks of potatoes up the back stairway of the Elk’s Lodge.
Parking was limited back then and so shoppers parked their vehicles many
blocks away then men like Larry Myhrer would wheel their
groceries, long-distance. In the spirit of cooperation, stores like
Hartz would even deliver to competitors when travel conditions had
prevented deliveries. Larry told me the biggest change is that stores
used to close on Sundays out of respect. These were different times.

Time doesn’t change all things- Larry still likes his job and the people.
It’s the people that make his job enjoyable. He’s held to the belief
that if his work is done in the name of the Lord and done well, all
else would follow. It is a philosophy that has worked very well for
him-and his customers. 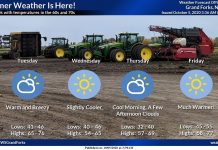 A Nice Weather Week Ahead 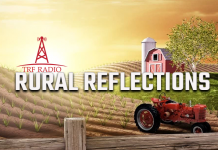