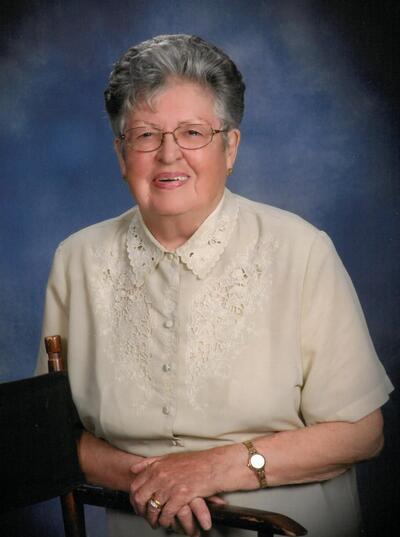 Mass of Christian Burial will be held at 1:30 PM on Monday, September 28, 2020 at St. Bernard’s Catholic Church in Thief River Falls, MN with Father Rick Lambert presiding. Visitation will be held from 4:00 PM until 6:00 PM on Sunday, September 27, 2020 at Johnson Funeral Service in Thief River Falls and will also be held one hour prior to the service on Monday at St. Bernard’s Catholic Church. Burial will be at St. Joseph Cemetery in Brooks, MN.

Vivian T. Lynch was born January 13, 1928 on the family farm in Equality Township, Red Lake County, MN the daughter of Frank and Louina (Paquin) Lynch. She was baptized and confirmed into the Catholic faith. She attended school in Oklee, MN and graduated from Lincoln High School in Thief River Falls, MN.

Vivian was united in marriage to Eugene E. Bruggeman on October 9, 1945, while he was home on leave from the Army.   He and his new bride moved to Oklahoma while he finished his tour of duty.  They made a home in Brooks, MN where he started farming. To this union four children were born, Linda, Gary, Dwight and Stanley.  They lived in Duluth for a couple of years in the late 40’s.  They moved 11 times in their early years.  They finally settled north of St. Hilaire, MN in 1959.

Vivian enjoyed camping, snowmobiling, dancing, fishing, sewing, baking especially homemade bread and buns and she loved her flower and vegetable gardens. She had a great sense of humor, was family oriented and devoted her life to taking care of Dwight after his accident. She and Gene each had a riding lawn mower and would mow the lawn together so they could go to their place at Springsteel Resort at Lake of the Woods. The couple enjoyed spending their winters in southern Texas for many years. They both volunteered to help cook and serve meals for St. Hilaire Community Club in and while in Texas.