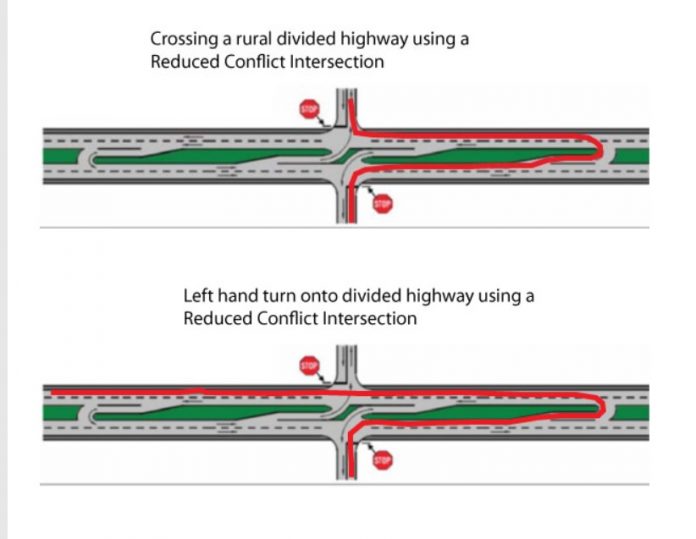 Marcoux corner may become a Reduced Conflict Intersection this summer at the intersection of Highways 32 and 2.. A Reduced Conflict Intersection is designed as a way to decrease fatalities and injuries caused by broadside crashes on four-lane divided highways. In some parts of the country, RCIs are sometimes referred to as J-turns or RCUTs. These same intersections exist at 30 locations in Minnesota with a 70 percent reduction in injury crashes nationwide and there have been no fatal crashes at any of them..

With an RCI, drivers from the side street only have to be concerned with one direction of traffic on the highway at a time. You don’t need to wait for a gap in both directions to cross a major road. Traditional four-lane divided highway intersections have an elevated risk of severe right-angle crashes (commonly called “T-bone” crashes), especially for drivers attempting to cross all four lanes of traffic or turn left. At a traditional intersection, motorists from the side street need to look in both directions to cross a four-lane divided highway. Left turns require the same level of attention.

In an RCI, drivers always make a right turn, followed by a U-turn. Motorists approaching divided highways from a side street are not allowed to make left turns or cross traffic; instead, they are required to turn right onto the highway and then make a U-turn at a designated median opening. This reduces potential conflict points and increases safety. Generally, the delay caused by a signal is greater than the delay caused by the RCI.